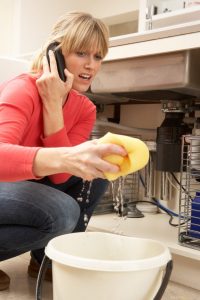 When the weather gets colder, burst pipes are a common concern for home and business owners. Frozen pipes can happen in any area of a building that is unheated. Attics, unfinished basements, crawl spaces, garages, and other unheated areas of a property are at risk of frozen pipes and water damage from those pipes bursting.

What exactly makes these pipes burst? People have a lot of ideas about why frozen pipes burst, but many are misconceptions. To understand what to do to prevent pipes from exploding, you need to understand the process of pipes freezing and bursting.

Ice Causes The Pipes To Burst

False. If you believe this, you are not unlike the many property owners in Tehachapi and all over the world. A common misconception is that ice inside the pipes expand and cause bursting. However, the reason the pipes burst is caused by the pressure inside the pipe. When the water inside the pipe freezes, the water molecules do expand, but the problem occurs when the expansion causes a blockage in the pipe, preventing the unfrozen water from passing through.

The pressure happening in areas upstream from the blockage, but between the ice and the closed faucet.

Pipes Burst During The Freezing Process

False. First, understand that not all frozen pipes burst or explode while they are freezing. The thawing process can cause the biggest problem for property owners. Once a frozen pipe starts thawing, the pressure grows because of the water that finally escapes the blockage and rushes through the pipe. When these pipes burst, a large amount of water will come out and can cause extensive structural damage, damage to flooring and carpets, and potential flooding. This is when a water damage restoration company like Alert Disaster in Tehachapi is your safest solution.

Pipes In Tehachapi Don’t Freeze Because It Is Too Warm

False. Don’t let this common misconception stop you from taking action and guarding against frozen pipes. Colder climates are built with the proper insulation to protect pipes from freezing in cold weather. Although the insulation is not always effective in extreme cold, it is a precautionary measure during the building process. In southern climates, like Tehachapi, pipes are likely unprotected, outside of the insulation. Home and business owners are not always aware of how the plumbing is installed and do run a risk of frozen bursting pipes during the less than dramatic freezing times of the year.

Again, preventative measures are not a guarantee against frozen pipes and water damage, but they can help reduce the risk. When homeowners suffer any kind of water damage due to frozen burst pipes or other types of water infiltration inside the building, Alert Disaster Restoration in Tehachapi has the experience you need to clean and restore your property the right way.