The Simple Facts of Business Fires 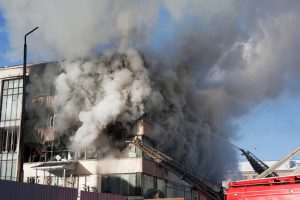 While you may know the main causes of house fires, and when they are most likely to happen, the facts surrounding a commercial fire damage disaster are considerably different. So are the circumstances! Some businesses end up closed for weeks, while others are reopened and ready for customers after just a few days. A lot of that depends on both the severity of the fire, and the restoration company on your side.

According to the National Fire Prevention Association, U.S. fire departments responded to more than three thousand business fires a year between 2007 and 2011, resulting in $112 million in property damage. Unlike house fires that happen more in the middle of the night, business fires are much more likely to happen during the day.

Check out these other stats from the NFPA:

Cause of the Business Fires

Containment & Putting it Out

Thanks to innovations in smoke odor removal, fire damage restoration, and cleaning in general, it is possible for crews to start work nearly immediately after the fire department clears the scene, and have things back up and running in no time. Again, however, that all depends on the severity of the fire.

Alert Disaster specializes in commercial fire damage restoration in the Tehachapi area. We have handled numerous fires, big and small, some with a lot of damage and some with very little. Our technicians are very well trained on every aspect of fire damage restoration ? from odor removal to physical repairs. We also have estimators and project managers who keep projects on budget, and moving efficiently.

If your business becomes one of the statistics and a fire strikes your business, rest assured there is light at the end of the tunnel! Alert Disaster is ready to help.