Winter is the time for cold, obviously. However, what causes winter to be colder than other winters and how can winter’s early arrival be explained? One way to explain this is the Polar vortex.

Due to the polar vortex, the crazy weather of last year, will be returning this year. This means, the U.S. literally gets blasted with Arctic Air. The central states suffering the blast the most.

So, what does this mean for Californians? After all, we are one of the lucky states that escaped the vortex. 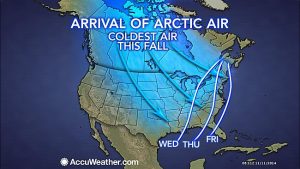 The polar vortex will have little to no affect on California. The state is in it’s fourth year of drought. Therefore, more precipitation would be celebrated. Winter is California’s wet season. Experts predict that California will get enough snow to hold back the drought a little. December will bring some rain to northern California. However, by February of next year, the precipitation will not be enough to prevent wildfires.

The good news is, the weather pattern will allow some Eastern Pacific moisture to be pulled in. This will increase the snowfall rates in the mountains. In addition, Southern California will get above-normal precipitation this season, especially in areas farther from the coast.

For those Californians living in the colder parts of the state, make sure you winterize.This will save you money on heating costs as well as protect your home investment.

And don’t forget, vehicles need to be winterized too!